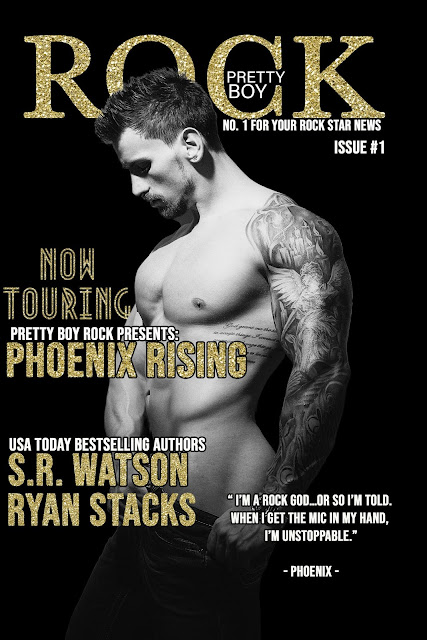 Phoenix’s bandmate has one rule: his sister is off limits. But Phoenix has never been very good about following the rules.
After a lifetime of being used, Phoenix’s walls are up, and there’s only one thing he wants: a woman to fully submit to him. Which turns out isn’t so hard to find as a rock star. In fact, he has never met a woman he couldn't conquer, until he meets Harlow...
Harlow is Phoenix’s bandmate’s sister, and completely off limits to the band. But as far as Harlow is concerned, she’s off limits to all men after what happened.
Yet despite the secrets they both keep, Phoenix is drawn to Harlow like a moth to the flame. She doesn’t like what he stands for, but he’s turned on by the rebellion and determined to bring down her walls.
There’s only one thing he didn’t see coming…
That she would bring down his.
Phoenix Rising: Issue #1 puts a rock star twist on novels like Fifty Shades of Grey and The Steel Brothers Saga!
Scroll up and one click to see why readers are saying this rock star romance is making their bodies thrum and their hearts sing.
ADD TO GOODREADS 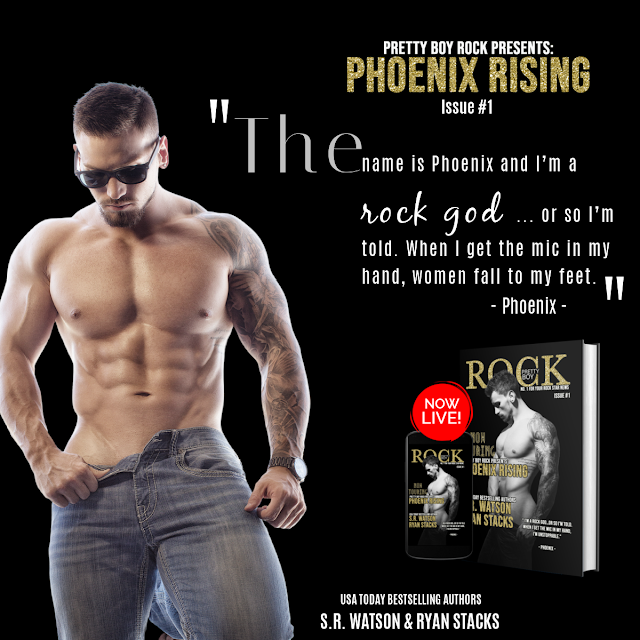 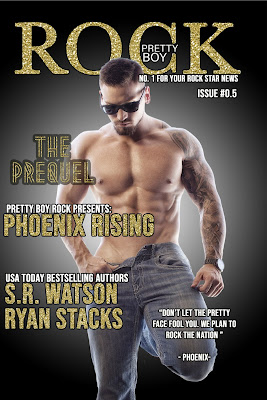 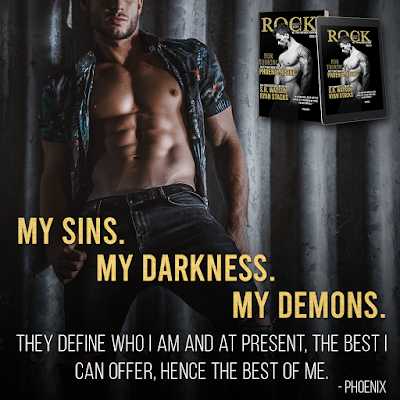 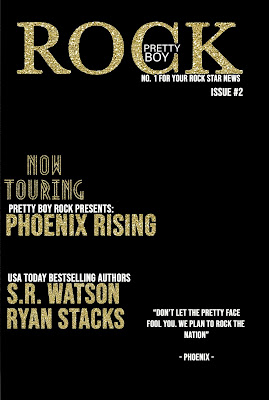 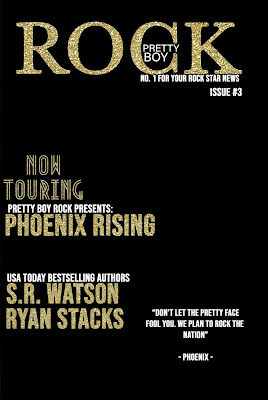 USA Today Bestselling Author, S. R. Watson, is a Texas native who currently resides in Washington with her children. She grew up reading the Sweet Valley series (Twins, High, & University) among others. Although she wrote countless stories during high school, she'd never published any of them. She continued her education and became an operating room registered nurse. The pursuit towards earning her degrees, meant less time for leisure reading and writing for a bit. After picking up reading again, starting with the Twilight series and 50 Shades Trilogy, she decided to pursue her passion for writing once again.
S. R. Watson (also writes as S. Reneé) published her first book in 2014. She is the author of the Forbidden Trilogy, The Object of His Desire, and the co-authored S.I.N. Trilogy. She co-authored Peppermint Mocha Love, R.L. Harmon (also writes as Ryan Stacks). The duo also collaborated on Unforbidden. Mister English, and Silas Part Two with more to come.
When S. R. Watson is not writing, or working as travel OR nurse, she loves to read and binge watch her favorite shows (Scandal, Elementary, Big Brother, etc.)
FACEBOOK
TWITTER
INSTAGRAM
BOOKBUB
PINTEREST 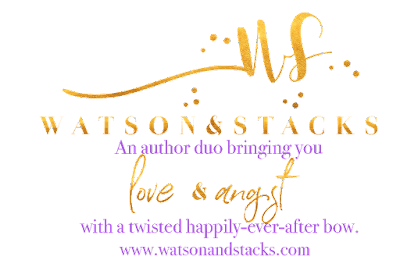 RYAN STACKS
USA Today Bestselling Author, Ryan Stacks, is a Washington native who currently resides in Kennewick with his wife Anna Harmon. Most would consider him a jack of all trades. His first love is wrestling and he's wrestled his entire life. In addition to his talents on the mat, Ryan has many achievements. He's a published international cover model and he released his first book, Peppermint Mocha Love with co-author, S. Reneé in December 2017. For this novella, he debuted as both an author and cover photographer. Ryan Stacks has partnered with S.R. Watson (also writes as as S. Reneé) to create more stories under his current pen name as well as R.L. Harmon.
When Ryan Stacks is not writing, he spends his time helping to build the wrestling sport within the community as one of the coaches for Richland High School as well as a youth program. In addition to his commitment to the community, Ryan has taken his fitness career to new highs as a men's physique competitor - placing top 3 at the national level.
FACEBOOK
TWITTER
INSTAGRAM
BOOKBUB
YOUTUBE 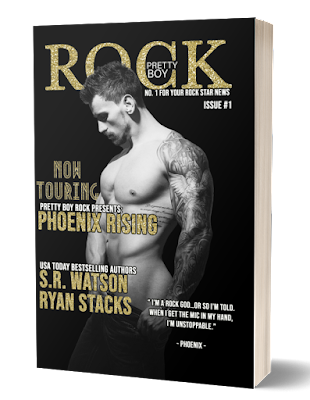 Prone to Crushes on Boys in Books's favorite books »

Title: Unforgiven Series: Sins and Secrets #2 Author: Willow Winters Genre: Romantic Suspense Release Date: June 19, 2017 The sins of his past can’t be forgiven. Mason Thatcher gave me chills when I first laid eyes on him.  The good kind. The kind that makes your body ache and your heart hammer.   What’s better is that he looked at me the same way. There was a hunger in his eyes that wouldn’t be sated, and a confidence in his stride that told me I could never run from him. Back then, I didn’t want to. It’s not fair that his touch eased my pain.   That his lips on mine made my worries vanish.   That his love gave me a reason to breathe again. With him, I felt complete, as if fate had given me a second chance. Then I learned the truth: the sins and secrets of what really brought us together.   I knew it was too good to be true, but I could never have imagined he’d be capable of something so cold and cruel. There’s no way we can go

Title: White Knuckles Series: Lost Kings MC #7 Author: Autumn Jones Lake Genre: MC Romance Cover Design: Letitia Hasser, RBA Designs   Cover Photo: Wander Aguiar Photography   Cover Models: Jamie Walker & Tiffany Marie Release Date: January 17, 2017 TWO TATTERED SOULS After countless detours, Wrath and Trinity’s wedding is only ten days away. Together they’ve battled their demons and are ready to declare their commitment to each other in front of their entire Lost Kings MC family. ONE BITTER ENEMY No one is prepared for the threat that crawls out of the shadows and issues an evil ultimatum. One that places Trinity’s future in danger and jeopardizes the entire club. Trinity’s more than ready to put her life on the line to save the club. For her it’s not a question. AN IMPOSSIBLE CHOICE Wrath’s role as protector of the club forces him to choose between the safety of his angel or the future of the Lost Kings MC and all they’ve built toge

Love Hurts by Mandi Beck Caged Love #1   Publication Date: January 18, 2015  Genres: Contemporary , Romance   Even when she won’t fight for us, I’ll go to war for her… Inside the Octagon, I have no fear. I’m at home, in my element, inflicting pain onto men trained to hurt me just as badly. Making them submit, knocking them out, maiming them, because it’s them or me. And I choose them. Outside the Octagon, my only weakness is a five-foot-two, classy as fuck woman that I’ve loved for most of my life. She’s the one that brings me to my knees, fills my arms, my heart, and one day soon, my bed. She makes me reckless. Volatile. I drink too much and try too hard to fuck my way out of feeling—all because of her. Frankie De Rosa is my girl, my best friend. I haven’t earned her yet, but I won’t stand by and let anyone take her from me. She will be the greatest fight of my life, but she’s worth the battle. Love hurts, but anything worth having does, right?  I

GIVEAWAY & World Tour - The Story of Us Trilogy by Sydney Jamesson

Stone Stripped Bare: The World Tour and Giveaway  TouchStone for play by Sydney Jamesson  Special Limited Edition       We are absolutely thrilled to bring you Stone Stripped Bare: The World Tour for the special limited edition of Sydney Jamesson's TouchStone for play!  TouchStone for play is a contemporary romance, hailed as a five star adult fairy-tale and is the first book in the  bestselling Story of Us Trilogy.    The Story of Us Trilogy Begins ...  Twenty seven year old English teacher Elizabeth Parker is waiting to be found. Like the secrets of her past, her beauty is hidden, concealed behind modest clothes and a gentle nature. Into her secluded world enter two powerful men.  Handsome playboy, Ayden Stone is flawless and as skilled in the bedroom as he is in the boardroom. He has a taste for rare and beautiful things, and he wants to taste her: he’ll do anything to make it happen. Uninitiated in the art of seduction, Beth embarks upon a voyage of sex

We are thrilled to share the cover of Dark Mafia Prince by New York Times bestselling author, Annika Martin!  Releases on June 28th! I spent years making myself invisible. A good girl, apart from the noise. Then you came back. Wrapping my hair in your bloody fist. Beautiful and deadly in your Armani suit. Don’t act like you still know me, you say. But I remember when we were best friends. Before they lowered your small casket into the ground. Before they told us the prince was dead. ADD TO GOODREADS About Anika Martin I’m a NYT bestselling author living a stone’s throw away from the Mississippi with my awesome husband and two cats in a home full of plants, sunshine and books. I'm heavy into writing love stories about criminals--some of them are dirty and fun (my Kinky bank robbers!) others are dark and intense (Prisoner!) I also write gritty romantic suspense as the RITA-award winning author Carolyn Crane. Facebook | Twitter | Goodreads | Amazon